High Velocity Low Amplitude Thrust is the more correct name for the manipulation used in English literature. The name of the method is abbreviated HVLA. Manipulation is also used as an umbrella term for all forms of manual medicine. HVLA is a direct ledbehandlingsteknik for a specific or multiple segments of the spine which is performed with a fast balanced shock. In performing the technique the movement will be small while the speed will be a rapid acceleration, hence the name fas a high speed small movement quick impulse. It is important that the therapist use too much force. It is also important that the direction of the impulse that it is taken correctly with respect to the biomechanical conditions of the part to be treated and the disorder that exists.

There are several hundred different synonyms HVLA-impulse. Various terms are used by different therapists  such as mobilization with impulse or adjustment.  HVLA can also be done on other joints other than the spine. It should also be emphasized in the U.S. where a lot of literature and studies come from states manipulation as a broader concept than what is normally used on the European continent. In Europe, considered to be a manipulation more directly a joint mobilisation with impulse.

The principles at HVLA is to normalize and increase mobility. The technology also has an effect on all the structures around the joint where it probably is a relaxation of the muscles. The popping sound that can often be heard at HVLA is attributed to the parts of the gas bubbles in the synovial fluid collapses due to changing pressure conditions in the joint. Some believe that the sound signal that the trail has ended up in the correct position again but this is a misconception. The mere clicking or tapping sound is not an end for an effective treatment. The primary goal of manipulation technology to improve mobility or to possibly get the disk inner core between the vertebrae to reponeras (restored). Ledmanipulationen has nothing to do with the skeleton which lay people tend to believe. However, doctors reponera skeletal remains that have errors in a broken leg.

HVLA-impulse can pose risks to the patient if performed incorrectly indication. A careful examination is a prerequisite for using these techniques. The therapist who performs these techniques must have a thorough knowledge of anatomy and medicine. Chiropractors, osteopaths and osteopaths have trained in HVLA techniques but also many physical therapists (including myself), and some doctors have been trained in these treatment techniques. 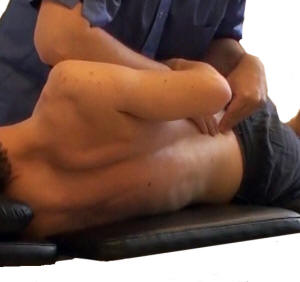 An important cornerstone of all manual therapy including manipulation is that you as a patient learn exercises for self-care so that you can prevent problems do not arise again. As a patient, you must not accept repeated treatments. However, it can at long-term problems or severe pain problems require HVLA occur in various sessions.

Is there any difference in how various health care providers who are trained in manipulation or adjustment using these methods in the clinic?

Of course it is difficult to know how all therapists and caregivers working. Generally I use and also many other physical therapists who have mastered the manipulation, these techniques are less likely than what a chiropractor does. I see the manipulation as an adjunct in the treatment of some conditions, but not as an end in itself that it should always be used. Other methods may also be suitable. This particular approach is also what the research supports.

Unfortunately, there is a dispute between, in particular, chiropractors and osteopaths about whose founder first with these treatment techniques. Osteopatins founder, surgeon Andrew Taylor Still learning have been the first but during the same time period in the late 1800s developed chiropractic by Daniel David Palmer. Osteopathy have early included many other therapies in addition to manipulation / adjustment while chiropractic has been much more focused on HVLA techniques. But historically, these techniques have been around long before both osteopathy and chiropractic. The Swedish physiotherapy, for example, in the early 1800s had the manual methods of trouble and even some manipulation and adjustment techniques.

Before both the modern physiotherapy, osteopathy and chiropractic have been wise “old women” and “men” who were called kotknackare (in English bonesetters). These have performed the manipulation of leads. In the literature, there is documentation that the adjustment and manipulation was already used in ancient Greece and Egypt. Osteopathy, chiropractic, physiotherapy and naprapatin actually have more systematized treatment philosophy where manipulation and adjustment are included.

We use cookies on our website to give you the most relevant experience by remembering your preferences and repeat visits. By clicking “Accept All”, you consent to the use of ALL the cookies. However, you may visit "Cookie Settings" to provide a controlled consent.
Cookie SettingsAccept All
Manage consent

This website uses cookies to improve your experience while you navigate through the website. Out of these, the cookies that are categorized as necessary are stored on your browser as they are essential for the working of basic functionalities of the website. We also use third-party cookies that help us analyze and understand how you use this website. These cookies will be stored in your browser only with your consent. You also have the option to opt-out of these cookies. But opting out of some of these cookies may affect your browsing experience.
Necessary Always Enabled
Necessary cookies are absolutely essential for the website to function properly. This category only includes cookies that ensures basic functionalities and security features of the website. These cookies do not store any personal information.
Non-necessary
Any cookies that may not be particularly necessary for the website to function and is used specifically to collect user personal data via analytics, ads, other embedded contents are termed as non-necessary cookies. It is mandatory to procure user consent prior to running these cookies on your website.
SAVE & ACCEPT